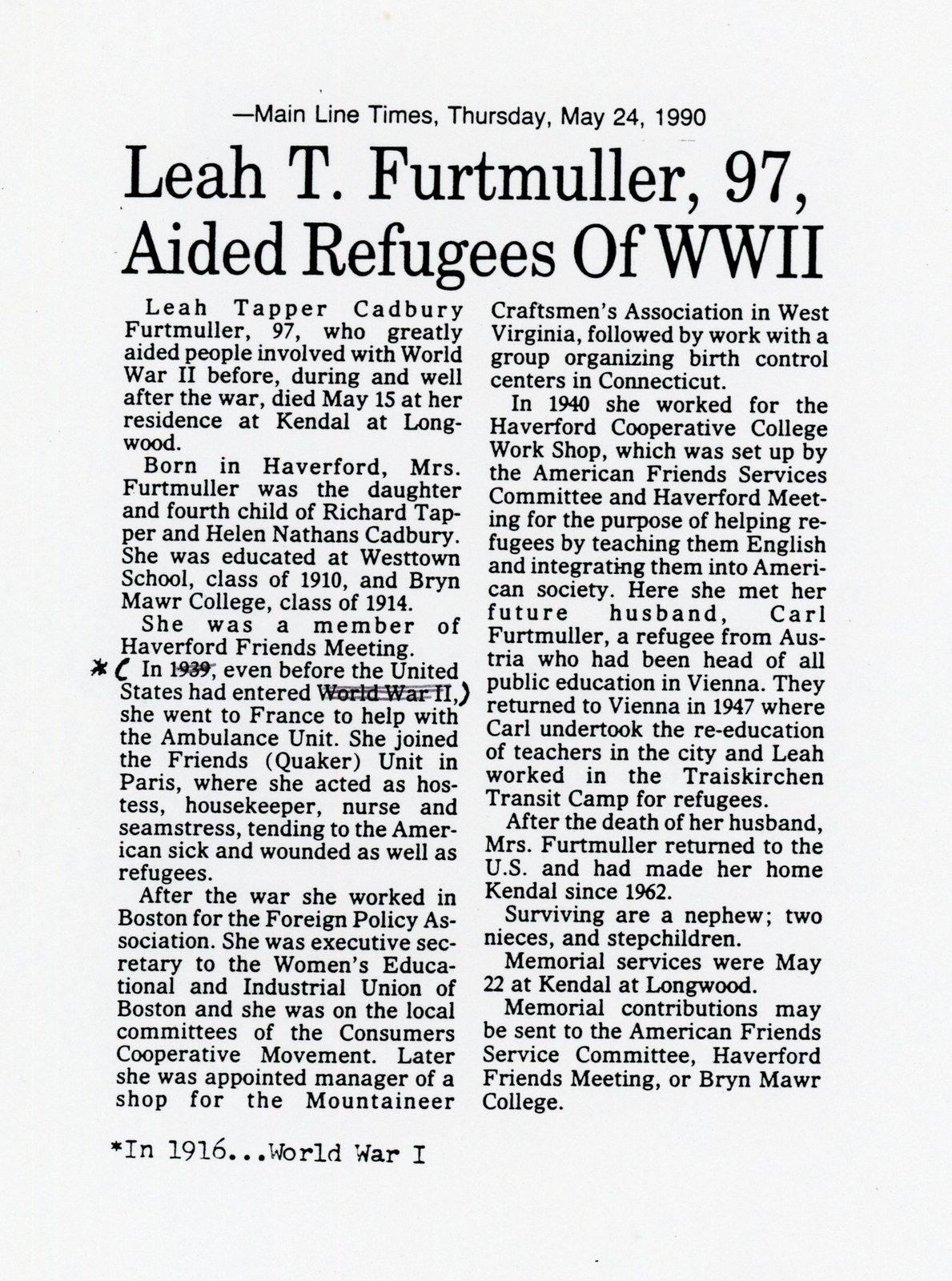 Many recent graduates readily volunteered to sail across the Atlantic and join the action in France. They were all in their early 20's but clearly were up for a challenge and adventure; typical of Mawrters even today.

Elizabeth Ayer, Rena Bixler, Leah T. Cadbury and Alice Miller Chester were all class of 1914. There is little information about Ayer and Bixler, except that they went to France and/or Italy in 1917. In 1916, before America entered the war, Cadbury traveled to France to join an Ambulance Unit. Soon thereafter, she joined the Quaker Unit in Paris, acting in many roles from housekeeper to nurse. Upon her return to the states, she continued to participate in social service roles.

Alice Miller Chester did an incredible amount of things while in France. Chester was an administrative assistant for two powerful men in the organization, YMCA with American Forces in Europe. She also drove a truck and sometimes acted as a nurse, despite having little training. When she returned to the United States, she organized and led the first Junior League and Girl Scouts in Milwaukee, WI. By 1949, she was very involved with the Girl Scouts organization at a regional and national level.

Eleanor Dulles and Margery Scattergood, class of 1917, traveled and worked together in France. They went soon after graduation - imagine, finishing four tough years at Bryn Mawr College and then go off to an unprecedented world conflict. Their courage and passion to help others is truly admirable. They volunteered with the American Friends Service Committee and Dulles recalls spending Armistice Day with Scattergood:

"Sixty-eight years ago today at Chateau Thierry on the Marne, I joined Margery Scattergood on a gray morning. She was working with the Quakers to help refugees returning to their homes in the north of France...Scat was strong, tireless and enjoyed life. Then, as always, she helped people. She was a fine companion in work and in play, a good athlete and a responsible citizen."

The four women mentioned carried their altruism and dedication displayed in the Great War back to their homes. Volunteering in France was not simply a fleeting moment but the beginning of their careers as progressive and influential citizens that worked towards more opportunities for women.