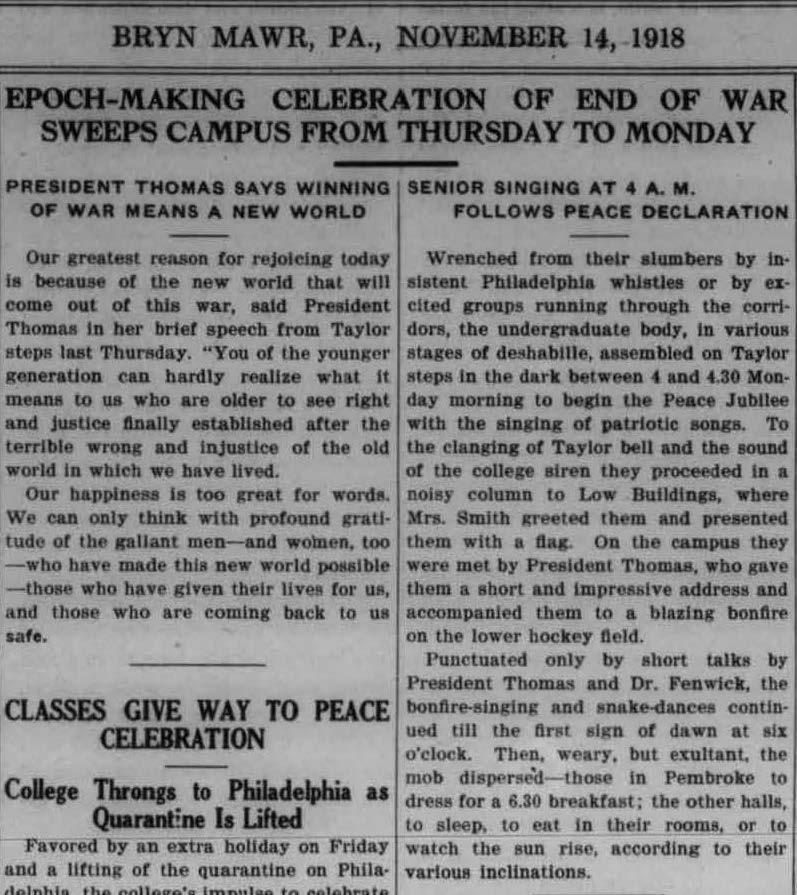 The College News article about the end of World War I published on November 14, 1918.

Nathalie Gookin, class of 1920, explains the atmosphere on campus with the announcement that Germany has surrendered in a November 11, 1918 letter to her mother:

"Thank God that at last the news is true and the war is over! And over so gloriously, with the German autocracy overthrown!

I shall never as long as I live forget all that has happened this morning.

At four o’clock we were wakened by the whistle blowing and church bells ringing. We all got up and went out. I dressed first, which some girls did not do, and I certainly was glad for it was cold. First we went to Taylor steps and sang while Taylor bell was rung and the power house siren blew furiously…When we got back to the Deanery, President Thomas was out & made a speech…Oh isn’t it glorious that day has dawned for the whole world?"

"I was awakened this morning at about twenty minutes past three by the continual ringing of the fire alarm in the village. I kept thinking it would stop but it didn’t…when I couldn’t help believing that it was all about another peace rumor I got up and went out into the corridor to see if anybody else’s slumbers were disturbed…we then started for Low Buildings to awaken the faculty. In the meantime a parade from the village, headed by the band of the motor truck fire engine came around through the campus."

These two students' observations are also chronicled in The College News. M. Carey Thomas expresses the sheer joy over the end of the war and there is a celebration for several days. The differences between Armistice Day at Bryn Mawr and France are quite striking. For the students, the end of the war meant the end of conscription, rations and sacrificing traditions, like May Day. Conscription was officially over after Thanksgiving Day and the quarantine due to the flu epidemic was lifted on November 15, 1918. This day was also an official holiday at the college, which was extremely rare during M. Carey Thomas' presidency. Students travelled in "throngs" to join the peace day celebration in Philadelphia. Despite the November 14, 1918 newspaper encouraging the continuation of war work, the next issue, published a week later, has only a couple articles about the war.