Bryn Mawr and the War: On the Homefront 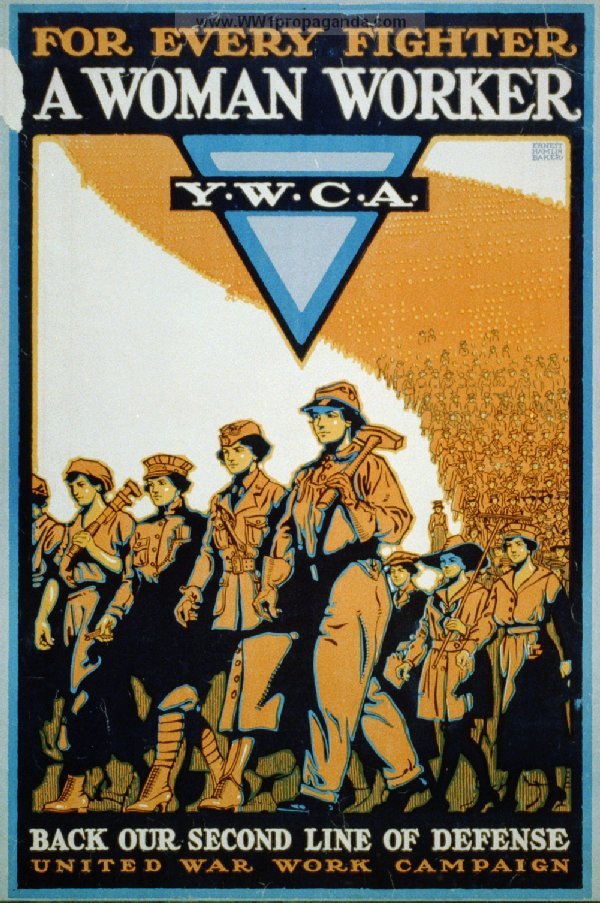 Rosie the Riveter is an American icon from World War II era. It's an empowering image for women: "We Can Do It!" But Rosie was not the first leading lady; during World War I, the Woman's Land Army (WLA) which was modeled off of a British group, employed nearly 20,000 women as farmerettes. Demand for farm products grew as World War I went on, which created a need for more workers. Many of these women were young college urbanites with no farming experience. But, women rallied to the cause and learned the necessary skills to run the farms while the men were absent. California fruit farms held a contract with the United States government to supply fruit for the troops. Due to the extreme labor shortage, the California WLA farmerettes were able to negotiate employment terms that were equal to that of a male farmer.

Bryn Mawr, Mount Holyoke and Vassar (3 of the Seven Sisters) participated in the WLA. Bryn Mawr President M. Carey Thomas was a strong supporter of the movement and encouraged Mawrters to contribute to the war effort. Bryn Mawr alumnae were also heavily invested in the success of the WLA. Schools were set up to train unexperienced farm laborers before they were sent out into the field. In 1911, Jane Browne Haines '91 founded the Pennsylvania School of Horticulture for Women (located at what is now Temple University Ambler) and at the time, it was the only school of its kind in the country. During the war, this school trained women to work and manage farms.

In the spring of 1917, Bryn Mawr secured land out in West Chester to grow beans, carrots, potatoes, fruit and vegetables. The farm was worked all throughout the summer and over the next school year. In the fall of 1918, students were conscripted to 9 hours of service per week: 4 hours of war work, 3 hours of recreation and 2 hours of physical development. The only excuse for failure to complete the mandatory 9 hours was severe illness and requesting substitutes was rarely permitted. Students' courses were not made any less intense due to the unpaid work requirement. Although this was difficult to manage, students generally seemed eager to assist the war effort.

"I think before long I'll be very nearly an expert at knitting socks on a machine...You know we are conscripted to do four hours a week of war work and I have chosen to work for my four hours on the knitting machine. It is not far from here - the occupations are over in the village - and it is easy work."

World War I was a moment of great societal and political transformation for the United States, including womens' civil rights. Women were recruited to enter the public sphere, proving to skeptical male farmers and men in government that they were just as physically and intellectually capable. World War I also saw a change in American women's fashion. Looser clothing and shorter skirts replaced petticoats and corsets, which are not very conducive to farming or working in a French Red Cross camp. Despite the fact that the WLA disbanded by late 1919 and women's place in the work force was reversed, the change in fashion remained. Even though the fight for women's equal rights continued for many decades, the 19th amendment ratified in 1920 finally granted women the vote.